“Janet Stevens has the experience and commitment needed to be our next Executive Councilor. She has spent many years giving back to our community through her work with nonprofits, local government, and her proactive participation in state government as a gubernatorial appointee to boards and commissions. I’m excited to support her bid for this seat and encourage others to do the same.”

“Janet Stevens has the experience and commitment needed to be our next Executive Councilor. She has spent many years giving back to our community through her work with nonprofits, local government, and her proactive participation in state government as a gubernatorial appointee to boards and commissions. I’m excited to support her bid for this seat and encourage others to do the same.”

"When a New Hampshire insurance carrier dropped reimbursement rates by 20% in major coding categories, the negative impact to New Hampshire practitioners and families could not be ignored.  I rolled up my sleeves and went to work for all New Hampshire families and Licensed Marriage Family Therapists, Licensed Clinical Social Workers, Licensed Mental Health Care Providers, Psychologists etc. to find a solution – proud to have advocated/negotiated a return to original rates!

Through an amazing advocacy effort from the NHAMFT Board, the Family TEAM, Executive Councilor Janet Stevens, NH-NASW, and many, many of our outspoken members who advocated on a personal and systemic level, we are proud to inform you that rates for these billing codes will be restored to 2019 rates by 9/1 or 10/1!

NHAMFT wants to highlight the work of Executive Councilor Janet Stevens. She was integral in this effort to push these concerns on a governmental level to influence this change. Councilor Stevens has not only been outspoken on this issue, but she has also been an advocate for mental health, NH families, and therapists. Her email is janet.l.stevens@nh.gov for any of you who may want to reach out to extend any thanks.

"So, I invited Counselor Stevens to join, and she indeed plans to, in case she doesn't like what she's hearing.  BUT... I'm hoping it's good news.  I'll get back to you all later with any information.  Councilor Stevens is being an amazing advocate for we providers and for NH families, by the way. She gets it, and she also receives all sorts of contacts from constituents, families in her district that are so struggling with pandemic related changes, mental health problems, suicidality, and much more. She was all over this, and between all of these meetings and I believe her applying pressure, …..really felt it. I scarcely dare to hope that they would change this rate drop, though if they do, it will be a great victory for all of us and for families."

"Janet Lannan Stevens thank YOU and Commissioner Nicolopoulos for correcting an egregious attempt by (Insurance carrier) to shortchange providers who serve couples and families in NH.  The impact would have been devastating, especially during a time when families have never needed us more.  Your tireless efforts and support do not go unnoticed.  Thank you for making this right for all NH mental health providers and the consumers who would have had devastating ripple effects had you not stepped up."

- Former Chair of the NH Board of Mental Health Practices and Licensed Therapist.

“Of all the candidates running for District 3 Executive Council, Janet Stevens is the best equipped to handle the duties of the job. I have been impressed with her depth of understanding of the issues facing the Council. It’s not only about the fiscal aspect of approving contracts, but also having a sense of the most efficient and effective way of delivering government services. Her experience in and outreach to the business community and the nonprofit sector, as well as her service on the board of Mental Health Practice make her especially well prepared to thoughtfully evaluate contracts large and small, as well as the Governor’s nominees for state positions in the executive and judicial branches.”

“The communities, businesses, and families of District 3 will be best served with Janet Stevens as their next Executive Councilor. The Council is responsible for crafting a state government that is transparent, efficient, and responsibly serves the taxpayers who fund it. With experience in the nonprofit, private, government sectors, Janet will make an exceptional addition to the Council and will be a strong advocate for our district. She has already shown her ability to lead during this pandemic by working to improve access to mental health, advising small businesses on state and federal support options, and working with locally elected officials on projects in their towns. I am proud to announce my endorsement of her campaign and to cast my vote for her in the Republican primary.”

“Janet will end government waste, protect our 2nd amendment, support our veterans, expand school choice, defend elections from fraud and say no to taxpayer funded abortions. Janet Stevens has my full support for Executive Council and I encourage the voters in District 3 to join me in supporting her.” -State Senator Regina Birdsell, representing Derry, Hampstead and Windham

“Janet’s experience at the local and state level is quite impressive and I applaud the work she has done with the Mental Health Practices Board during the pandemic. After learning of the work she’s done for nonprofits, her community, and our state, I believe she is the best candidate in this race. Janet Stevens will protect taxpayers’ dollars from wasteful spending, vote to appoint qualified, effective leaders to our state agencies, and will be a conservative, commonsense voice representing District 3. I encourage my colleagues and constituents to join me in support of Janet Stevens for Executive Council.”

“New Hampshire’s Executive Council, essentially, serves as the Board of Directors of State Government. Janet has the skill set, knowledge and experience to uphold the role of an Executive Councilor - at an exemplary level. Discernment, empathy, leadership, the ability to build consensus, while providing a public service for the people of New Hampshire, is what it takes to be an Executive Councilor. Janet exudes all of these qualities. The constituents of District 3 will be well served by Janet Stevens as their next Executive Councilor – they can trust she will work hard each and every day to represent them.”

John Lyons of Portsmouth, former Chairman of the State Board of Education

The Hon. Sean Morrison of Epping

Joan and Jerry Gittlein of Rye

Nancy and Warren Kindler of Epping 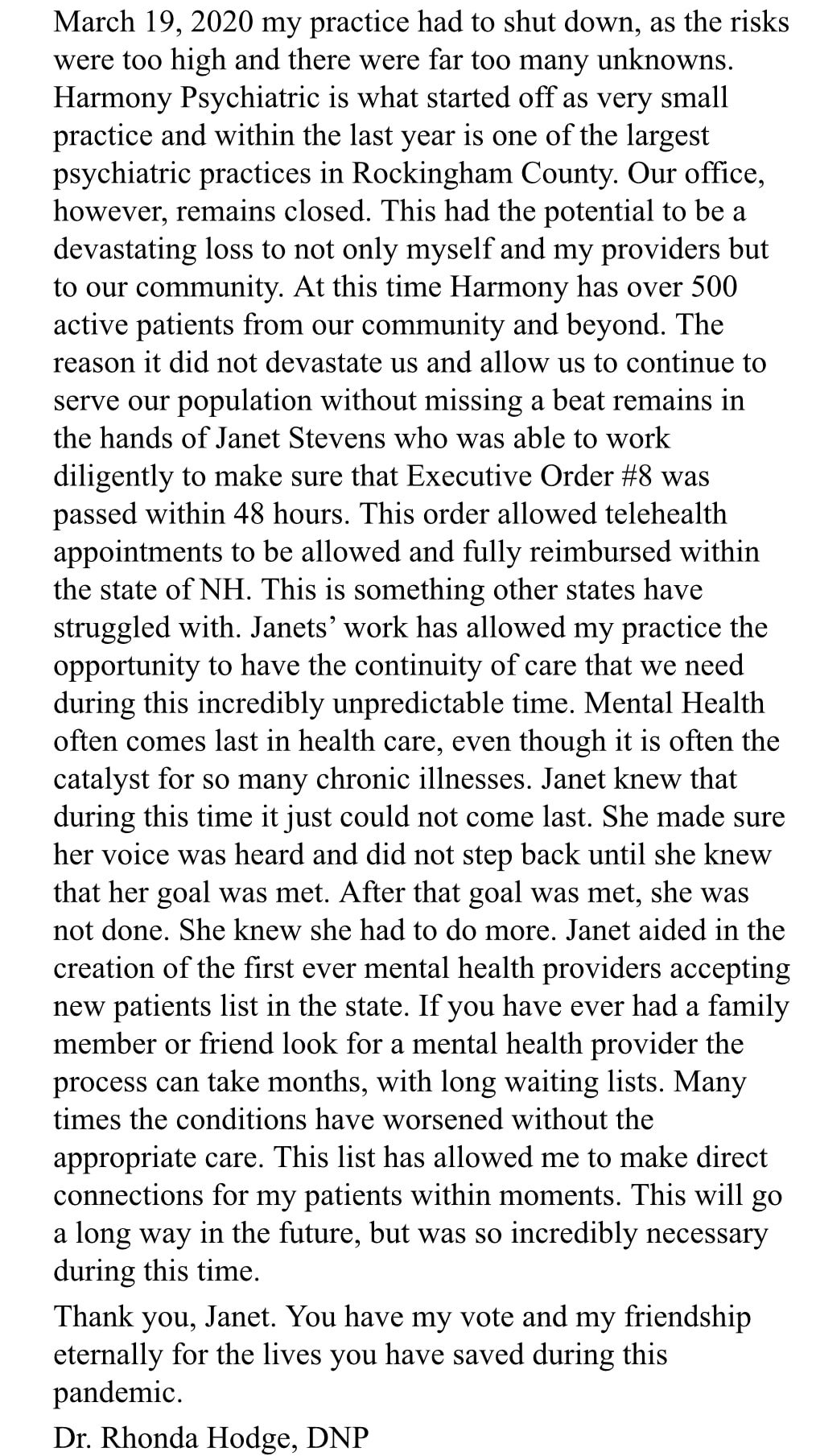